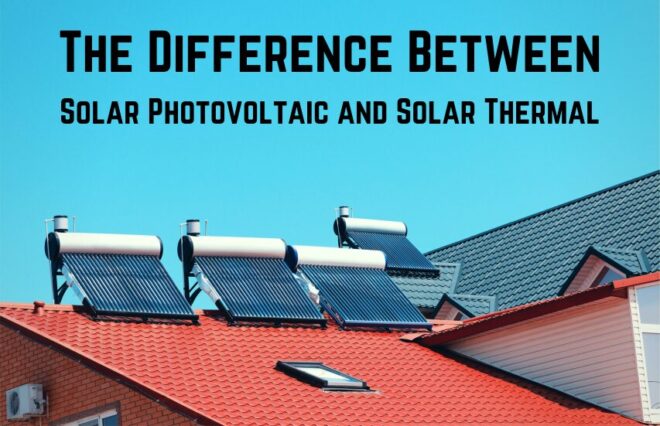 The sun is the ultimate source of energy. The very foundation of why the renewable energy market was developed is according to this principle.

Today, the market for renewable energy is huge, and the majority of these green technologies are operating by reaping solar energy, either indirectly or directly.

In the indirect energy sources, harnessing wind energy is now widely used in some parts of the world. The low grade geothermal, which uses the ground heat to power pump systems is well established. The use of tide and wave, meanwhile are still underdeveloped.

When we talk about direct solar, the energy source is the rays of the sun that is reaching our atmosphere. There are two technologies to collect solar energy, one is through solar photovoltaics (solar PV), and the other is solar thermal energy. Let us have a look at how these two technologies differ and what are their advantages and uses.

The main difference between the two (solar PV and solar thermal) is on their operating principles. Solar PV relies on the photovoltaic effect. Here, the basic unit of light, the photon strikes a surface of a specially made material that causes the release of an electron. In solar thermal, however, it uses the sunlight to boil a fluid. This fluid can be water or any liquid, depending on its application.

The photovoltaic effect can only take place in a small number of materials known as semiconductors. These semiconductors can be a silicon monocrystalline, polycrystalline combined with an amorphous material or cadmium telluride.

It undergoes a specific chemical reaction, which facilitates the release of electrons when it is exposed to sunlight. These semiconductors are formed into delicate layers that form the core component of the solar cells. The solar cells are the basic part of the solar photovoltaic system, which produces the direct current.

These solar cells are then integrated into a larger structure, the solar panels. Through the solar panels, the desired amount of voltages and current. In grid-connected systems, used by the majority of the current market today, it needs an inverter to convert the DC produced by the cells to AC, which is used in the grid.

The solar thermal systems work on a less sophisticated principle but can harness the same energy as the photovoltaic effect. As mentioned earlier it works on directly heating water or other fluids using sunlight. This energy conversion happens in different devices depending on the required temperature range the fluid is being heated.

In low to medium temperatures, the collectors can be either evacuated tubes or plate panels. In high temperature, it can be more advanced like Fresnel reflectors, solar towers, parabolic trough or dish Stirling.

In order to enumerate the use of Solar Photovoltaic and Solar Thermal technologies, we should separate the power plants from household solar users for both.

The aim of generating electricity is the shared by both technologies in power plants. While in PV systems, the electricity is directly generated from the solar energy in thermal systems, it needs to heat water or other fluids like oil to run a steam engine or something similar like a gas turbine. The electricity it generates is transferred into the grid as AC carrying the required amount of voltage.

There is significant growth for both of these technologies around the world as many are under development while more projects are in the pipeline.

PV installations in residential areas can produce direct current electricity straight from solar energy. There essentially two types of residential PV system, the grid-connected and the “standalone” or “off grid.”

The first one is being encouraged because it can sustain the grid using an inverter. The standalone, of course, is dedicated for self-consumption. It is used for lighting, water heating and heating the house. This type of setup also requires a set of battery banks that will separate the generation function from the consumption.

Solar thermal systems are utilized in the household for one purpose, water heating. They are usually working in combination with the central heating system. When the temperature low in the tank below the required value that the system will start working. Meaning the system can deliver hot water all-year round even in temperate countries.

Another way is for the thermodynamic system to heat water with the built-in compressor. This will make the system oil-independent and will instantly fill your tank when you have used up all the water. In Sweden, the solar thermal systems are utilized to heat up spaces in the homes.

Related: Understanding the Facts of How Solar Energy Works

If you are interested in solar photovoltaics or solar thermal systems, Our Solar Energy can bring the power of the sun to you. They offer a free estimate from many solar energy suppliers and give you an idea of the solar panel size, and thermal setups among others that you need. They will explain to you thoroughly how it works and show you the differences between the two.